The Lamacchia Housing Report presents overall home sale statistics and highlights the average sale prices for single families, condominiums, and multi-family homes in Massachusetts and Southern New Hampshire for December 2017 compared to December 2016. It also looks at other metrics in Massachusetts like Homes Listed and Pending, as they are often the best indicators for predicting future trends in the market. 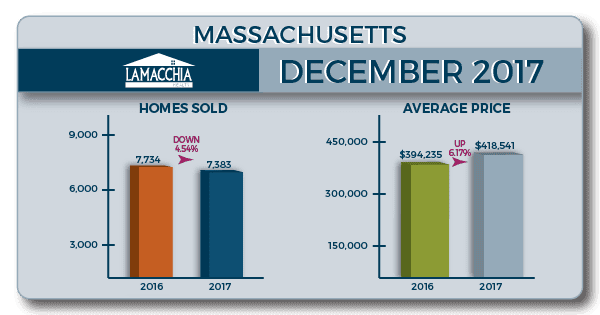 In December 2017, 3,459 homes were listed for sale in Massachusetts compared to 3,594 in 2016, showing a 3.76% decrease.  That’s about half of the 6,399 homes listed in November 2017, which is to be expected, given that we are seeing the lowest inventory ever recorded as well as the typical trends in diminishing inventory during the winter months.  Click here to read a blog on inventory trends.

There were 5,049 homes listed in December 2017, only a little under half a percent decrease from the same month in 2016.  With both listed and pending sales numbers down this month, it’s likely to see further diminishing sales numbers in the next month or so until the market picks back up for buyers in the spring. 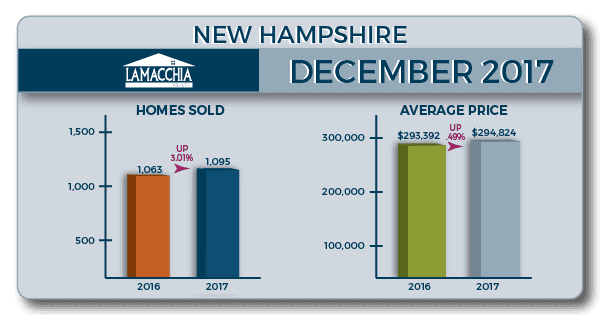 This year is beginning as predicted, with low inventory and a general increase in prices for homes.  Demand is high, and that competition drives up prices.  We are currently experiencing the lowest inventory ever recorded, so it’s the best time for sellers to get geared up and take advantage of the market.  Buyers are out there looking for homes, and if it’s priced right, you’re likely to have multiple offers to choose from in a bidding war.  Only experienced agents will know how to get you there, so be sure to connect with one as soon as possible.  Buyers, on the other hand should remain vigilant and be ready to go to battle for their desired property.  Read this blog about being ready to strike and win a bidding war.  Homes are out there!  Over 3,400 homes were listed in Massachusetts in just December alone.  Preparation is key to boost the likelihood of an accepted offer- so be sure to work with an agent who knows how to navigate this busy, bidding war frenzied market.