The Lamacchia Housing Report presents overall home sale statistics and highlights the average sale prices for single families, condominiums, and multi-family homes in Massachusetts and Southern New Hampshire for September 2017 compared to  September 2016. It also looks at other metrics in Massachusetts like Homes Listed and Pending, as they are often the best indicators for predicting future trends in the market. 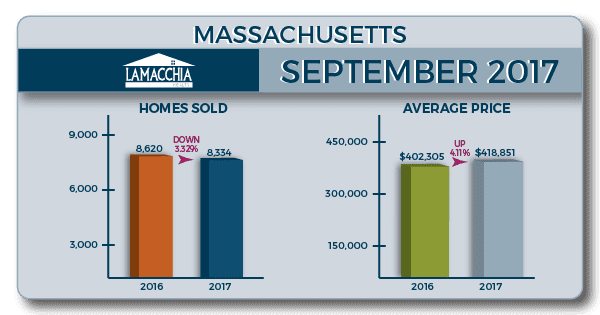 There were 10,529 homes listed for sale in Massachusetts in September 2017 compared to 10,583 in September 2016 which represents a negligible .51% decrease. We predicted that due to July 2017’s decrease in pending sales that sales could be down for the early fall months, which is turning out to be the case but only by 3.32% which is fairly minimal.  Though there was a slight decrease in listed homes for September 2017 compared to 2016, the number of listed sales is up from August 2017 by 15.3% (from 9,134 in August to September’s 10,529).  This means that there are much more homes for buyers to choose from this month, keeping the market in their favor for a while longer.

There were 8,495 homes that went pending in September 2017 according to MLSPIN, compared to 8,604 in September 2016, which represents a very slight decrease of just over one percent.  Although not a statistically significant change, when the number of pending homes is down, it shows that the number of sold homes could be down for October.  It could go either way, though, because with the increased inventory, we could have a busy few weeks with aggressive buyers and sales could make a turn for the positive. 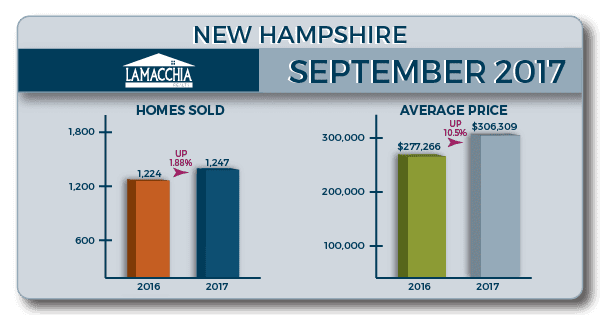 There was a slight increase in the number of homes listed for sale in September when compared to August, which is a positive sign that buyers will have plenty to choose from if they get out there as soon as possible, as explained in our recent blog about this fall’s market.  If that happens, and buyers get out there and take the homes they want, sales could actually increase for next month.  Fall is the best time to buy and we do still expect to see the market amp up in the next few weeks.  Inventory does begin its annual plummet in mid-to-late November but that doesn’t mean that everything comes to a screeching halt.  Sellers who list in the winter are very motivated to sell, and the buyers that are out there are generally anxious to close on a home as soon as possible, click here to read more.   With that being said, listing now is a great idea for those who want to sell to buyers interested in closing before the holidays, if you’re thinking about it,  read our blog on the best ways to prepare for selling in the fall.  As always, contact us at Lamacchia Realty with questions.