This Lamacchia Summer Housing Report presents overall home sale statistics as of June 1st through August 31st, 2017 compared to the same period, June 1st through August 31st, 2016. Highlighted in this report are the average sale prices for single-family, condominiums, and multi-family homes in Massachusetts and New Hampshire during the summer months.

This summer’s slight increase in total home sales for Massachusetts and strong increase for New Hampshire are a result of the low inventory at the end of 2016 which continued throughout the first half of this year.  The increase in average price for this year was also related to the low level of inventory, as many homes sold for over asking in multiple offer situations, which drove prices up.

Massachusetts Home Sales Up Half a Percent

This year’s low inventory in Massachusetts lasted longer than we’re used to, as mentioned in our blog, Don’t Worry Buyers, Nothing Lasts Forever.  Homebuyers experienced a less frustrating summer than winter and early spring this year, thereby allowing for home sales to remain steady.  The lack of inventory that we saw in the first six months of this year directly correlates to summer 2017’s lackluster .49% increase in home sales, which is up from 30,887 in 2016 to 31,039 in 2017.  Multi-families were the outlier, with sales generating the largest positive change, moving from 2,404 to 2,475 sold, a 2.95% change (single families increased .03% and condos increased .94%). The summer is when we generally see the scales begin to balance between a buyer’s and seller’s market, so the number of home sales remaining steady is not surprising, though generally, we like to see increases year over year.

Many homes sold for over asking in multiple offer situations in the first half of the year, which is often the case with a shorter supply of homes listed on the market.  The summer’s increase is slightly stronger than what we saw in the 2017 Mid Year for Massachusetts, which is a good indication that lack of inventory was less of an issue during the summer months. 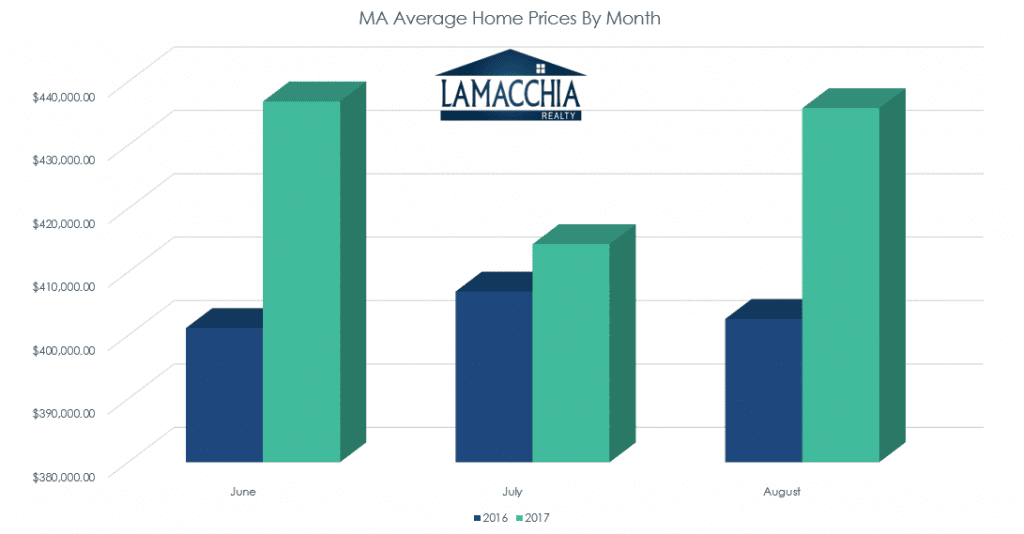 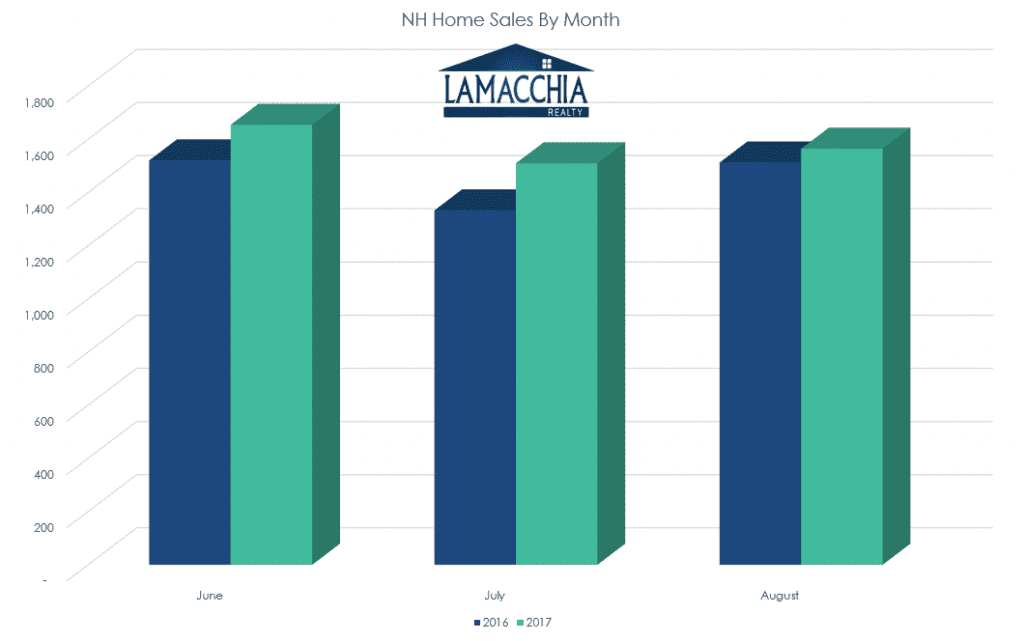 New Hampshire’s home prices rose 2.79% with an average price of $291,609 compared to an average of $283,698 in 2016.  Single families increased the most, from $302,678 to $320,919, a 6% change (condos only increased .5% and multi-families dropped 6.6%).  The rise in average price for homes is accounted for by the same situation we saw in Massachusetts. The sale prices were driven up by bidding wars as many buyers competed for the low number of homes available on the market.  This number is a less significant change from the Mid Year’s 11.6%, indicating that buyers had more negotiating power with more inventory on the market. 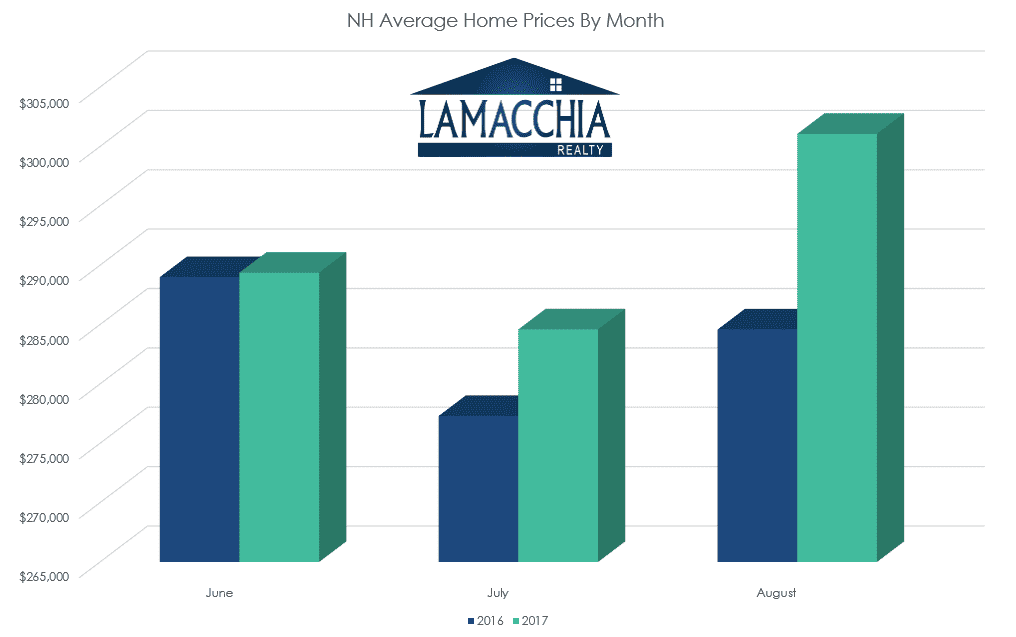 There were 29,620 homes listed for sale in the summer months of 2017, according to MLSPIN, compared to 29,790 last year which represents a decrease of a little over half a percent.  It’s not surprising that the number is lower than last year when taking into consideration that the year as a whole has been down over last.  The August 2017 Housing Report demonstrated a 2.5% increase, suggesting that we will see the market stay in the buyer’s favor for the next month or so to come, as explained in our recent blog.

The best indicator of home sales to come is pending home sales. These numbers tell us the number of total contracts accepted but not yet closed. From June 1st through August 31st 2017, there were contracts accepted on 26,844 homes compared to 26,855 in the same period in 2016. This represents a .04% decrease- basically remaining level. This is an improvement from the Mid Year report’s decrease of almost 4%, so we could still see increases in the number of homes sold in September or October.

Predictions for the Rest of the Year:

As mentioned in our recent blog, It’s a Buyer’s Market… For Now, this is the best time of the year to buy a home because inventory is at its peak.  Historically speaking, inventory is lower this season than it usually is, but compared to the rest of 2017, we are at a high for the number of homes listed on the market.  The market seems active, but we do tend to see a lull in October and we expect that to happen at any time and there’s usually a bit of a race in the market for those buyers hoping to close before the end of the year.  Overall, we expect the year to be slightly up over last. 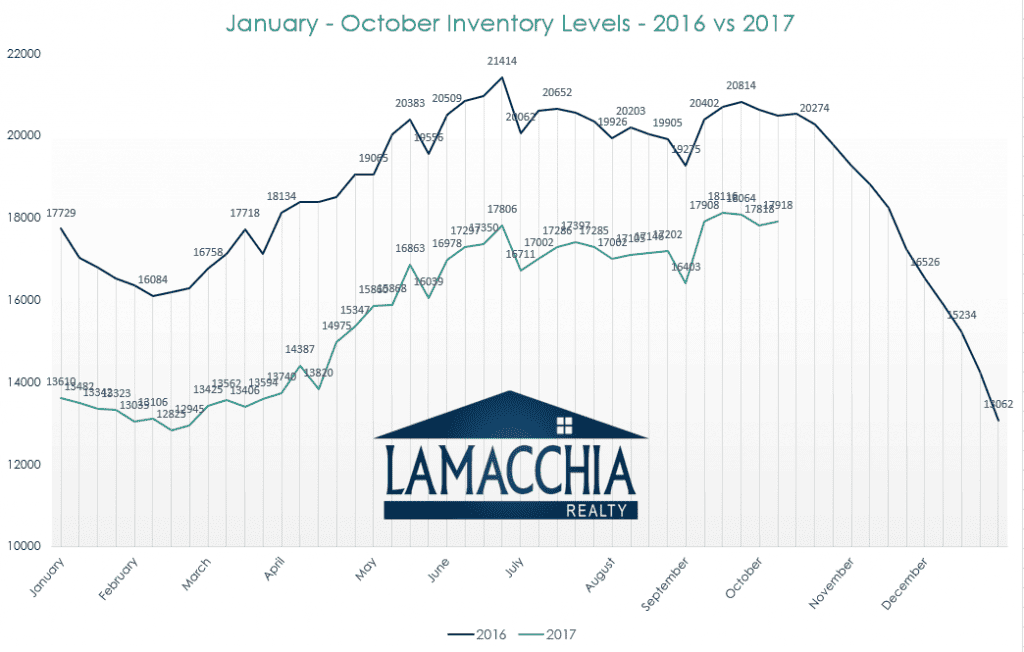